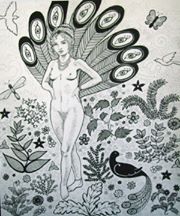 The eye of Ra, she is the sun
there was no time at her creation
endless wandering she wanders
right now in wonders
she holds the sun in her tail
the sun holds her in her eye
“take a bite, take a bite”

The tree tested the temptations
it said, “i’ll let the earth be seen,
forget that it’s mostly empty space
and remember you are queen.”

Her holy mouth, which speaks the holy words
the holy words which makes the holy move
the holy move which is all she knows
is bustling in the trees and buzzing as bees
who forwent their stinger
in exchange for no fever
as an apologist might say,
“if it weren’t for the honey
I’d get rid of these lazy things”

caressing the pear she noticed
she suddenly knew the thing,
like definitions and magic
order of colors and notes to sing
she categorized her emotions
able to put them in and out of a box
she noted her hormonal changes
over days months and thoughts
a foreign urge peached in a tree
lined with peaches apples pears and kiwi
whispered promises, gently,
“you will be, be will you free.”

An export concept not for the ageless
immortals can’t imagine a lifetime is cages.
It’s philosophically broken down into stages
as today’s bliss is tomorrow’s rages
occasionally it is cowardice that’s most courageous
but there is no distinction between now and then.

Mellitology was born in her
picturing 17000 variety of bees
and only one produces honey
sweeping creeping swarming looping
they march a cadence while trooping
and making formations like fighter jets
“what’s a fighter jet fighter”
her thoughts and self split in two
her beautiful feathers exchanged for a war
her energies concentrated in tubes of abhor
they displeased the gods of sonic
and distorted the goddess of light
she was suddenly thinking in gender
and this dichotomy seemed all right…
“what happened to the unity?” she asked
and the pear revealed only plight
“what happened to unified will,” she hoped
“Freedom,” the fruit’s skin breaks the night
telling pores to clog and bumps like suns to rise,
a rash is its only wish to be,
“we are not one, my friend
my enemy, we are free.”

Pontiac stood at a podium
kings of England and chiefs of legend
anticipate the sermon in store.
He spoke in the language of names
she thought, “who is this service for?”
those words reserved
for those past time
and everyone understood it,
including Miss Sublime.

“Forget your homes,” the chief said
“for their walls block out the one verse.
forget your eyes,” he requests
making dreams second, the world first.
forget your tongue,” he implied
“language is the an inflawless thing
forget yourself,” he required
“which separates you from one being”

The king raised a revolver
the Zulu and Cherokee took arms
the aboriginals stated sleeping
and pears fermented to barm.
Miss Sublime watched the vision
and felt the confines of time
it was the first and there will be
no last, she accepts the way
and respectfully declines.

“Some other eve,” she concludes,
“another night will take these fruits
a different atom will make that call.
I will gladly view as all-one takes and,
in gradual entertain, watch freedom fall.”